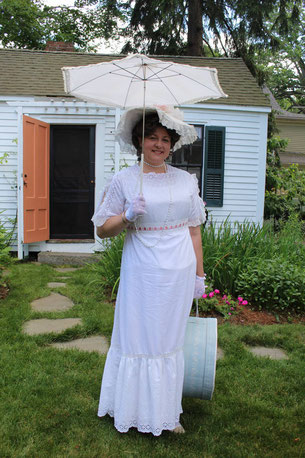 Join us on  our YouTube channel (youtube.com/user/CustomHouseMuseum) at 6:30pm on Friday, January 8, 2021 as we welcome Rita Parisi, founder of Waterfall Productions to the Custom House’s monthly Virtual First Friday event.

Rita Parisi founded her production company, Waterfall Productions, in order to create original theatrical presentations for the purpose of entertaining and inspiring her audiences through her passion for performative storytelling, costuming, literature, and history. Her one-woman shows present characters from the eighteenth through twentieth centuries in a variety of historical contexts.

Rita will be on-hand to talk about what inspired her to create her production company, and its one-woman shows. She will discuss how she chooses her subjects; how she researches, writes, and performs the pieces, and even designs the props, staging, and costumes for the productions!

After the presentation, there will be an informal Q & A, in which Rita will interact with the audience and answer their questions.  You can find out more about Rita and her work at: www.waterfallproductions.com

Rita Parisi is an actress, singer, dancer, producer, and playwright with 25 years of performance experience. In 2002, she founded Waterfall Productions to showcase her one-woman dramatic and musical shows, which have been seen in New England, New York, New Jersey and the west coast of Florida.  In addition to her solo work, she has performed in musical, dramatic, improvisational and interactive theatre. Some of her theatrical credits include: Mother Superior in Nunsense, and Mary Warren in The Crucible. In the past, Rita also has been involved in Boston’s film scene and her films have been premiered at the Boston International Film Festival and the Cannes Film Festival. She is a proud member of the largest acting union in the country: SAG/AFTRA (formerly the Screen Actors Guild and American Federation of Television and Radio Artists.