Descended from George Little, who arrived from England to the 5-year-old Newberry Plantation in 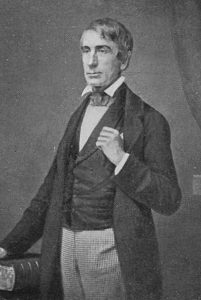 1640, Jacob Little was born March 19, 1797, to Jacob Sr., a merchant, and Hannah (Sawyer). Jacob Sr. made his fortune throughout the 1790s and early 1800s, until the Jeffersonian embargo and, ultimately, the War of 1812, led to financial ruin. With few prospects in his hometown, 20-year-old Jacob left Newburyport in 1817 and made his way to New York, where he went to work in the counting house of Jacob Barker, one of his father’s former business associates. Little worked for Barker for five years, becoming an expert in the businesses of finance and merchant trade during that time. Having saved $700, Little opened his own specie exchange brokerage in a small basement office in Wall Street. For the next 12 years, he worked 18-hour days, building up his business to become one of the leading stockbrokers in New York.

Little’s reputation as a stockbroker was well-known, particularly as one of the earliest speculators. Then, as now, speculators made their money by “shorting” – leveraging both short sales and short sellers. Little’s first big success was his 1834 acquisition of all the shares and bonds of the Morris Canal and Banking Company, which moved coal from Pennsylvania to New Jersey. Having “cornered the market”, Little pushed the stock price from $10 ($256 today) per share in December 1834 to $185 ($4,738 today) per share in January 1835. Nine months later, Little did the same thing – cornering stocks for the construction of the Harlem Railroad. At the time, 60,000 shares had already been sold short, but only 7,000 had been issued, and Little profited enormously, making him one of the richest men in America, and earning him the nickname “Napoleon of the Board.”

Little made large, early investments in the railroad construction industry at a time when many of his peers were suspicious of that kind of investment. His earnings from these investments not only made him exponentially wealthier, but also earned him a new nickname: “Railroad King”.

While the “Railroad King” was known for his financial foresight and prompt business dealings, he was also seen as unscrupulous and unpopular with other investors. For example, he promised a group of traders that he would not sell his holdings in the Norwich and Worcester Railroad below a certain price, but he did it anyway. He also predicted the Panic of 1837, and was able to protect his interests by short selling his own holdings, a lucrative operation that earned him his most lasting title: “The Great Bear of Wall Street.”

In the early 1840s, Little attempted to short the stocks of the Erie Railroad Company, when a syndicate of rival stockbrokers bought all the outstanding shares and contracts. Thinking they had Little beat, they forced him to show up at the Erie Railroad Company clerk’s office, to make good on his short purchase. What they didn’t know was that Little had purchased convertible bonds at a sale in London a few years before. When Little showed up at the clerk’s office, he demanded the bonds be converted to stocks, and actually came out hundreds of thousands of dollars ahead.

But Little’s skill, and luck, could not last forever. The Erie Railroad Company incident got him blackballed from entry to the New York Stock Exchange. Over the next ten years, Little gained and lost his fortune at least three times, though he always paid his creditors in full, with interest, even when he had no obligation to do so. This led to a saying at the time among Wall Street financiers that “Jacob Little’s suspended paper was better than the checks of most merchants.”

Little passed up the opportunity, in 1847, to invest in a new technology – a telegraph line between New York and Boston. Little would later admit that, had he accepted Samuel Morse’s proposition, he would have owned almost all of the telegraph lines in the country.

Finally, having failed to anticipate the Panic of 1857, Little was forced into bankruptcy, from which he never recovered. 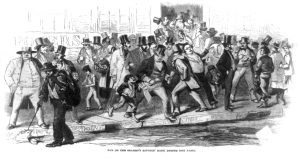 Little died, penniless and broken, on March 28, 1865, at 68 years old. In 1882, when the New York Times published a historical reflection of the Erie Railroad Company, Jacob Little’s reputation was all but cemented:

“He drove Wall-street before him just as in his earlier days he would have lashed a recalcitrant ox into obedience. No method was too severe for Jacob Little. If a man stood in the way, that man got hurt. Naturally, the whole Street was dead set against him. Innumerable schemes were laid for his discomfiture, simply to end in miscarriage. Combinations were formed, to be speedily dissolved under the crack of the Little whip.”

By 1923, when Wall Street journalist Edwin Lefèvre published his Reminiscences of a Stock Operator, he found almost nobody on Wall Street had even heard of Jacob Little. Lefèvre accounts for that by noting “what happened to Jacob was no more than what happens to thousands every year. The difference in degree does not make it more memorable.”

Perhaps then, Jacob Little’s ultimate legacy is as a cautionary tale that seems particularly apropos today.