A Peek Into Our Collection: Carl S. Johnson’s Autograph Book 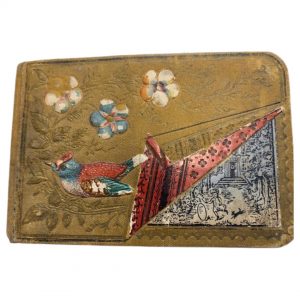 Among the Custom House collections, is a small autograph book. The cover is linen embossed with detailed color paper of a bird perched on a branch of flowers. Artistically inspired corner fold reveals a New England scene with a small child playing hoops.

Expecting a lady’s collections of autographs, it was surprising to discover the following words on the first page, the property of Carl S Johnson of Newburyport, aged 6 years on December 17, 1882.  The book is full of handwritten names with location and date – a treasure trove itself.   Two open pages contain the inscription on the left, Capt John Simpson, aged 80 years old on October 4, 1882, alongside a beautiful painting of a full-rigged ship named Astraea. Why would a seasoned sailor like Captain John Simpson take the time to sign a little boy’s autograph book in the way he did? It raises the question of how they were connected. 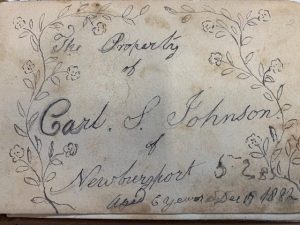 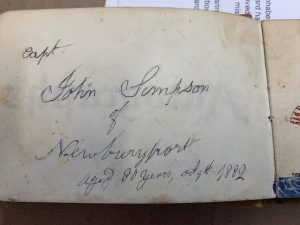 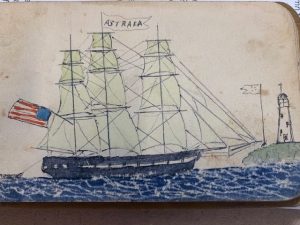 Drawing of the Ship Astraea

According to birth records, Carl S Johnson was born in 1876, the son of Neal Dow Johnson and Mary E Smith. Marriage records show they married two years before. The Newburyport 1880 census records indicate the couple and their child as living at 52 Washington Street, the same address as the Captain!  The census also indicates that Neal Johnson was a railroad lineman and his wife was a homemaker.  Most interesting is the census records lists the Captain as one of four boarders living in the house. How could the Captain be a boarder in his own home? A search of deeds confirms that the Captain owned the house right up until his death in 1887.

No records were found as to when the Captain stopped going out to sea, but there are records in the 1860s and 1870s that show he earned a living in a couple of different ways, one of which as a janitor for the Newburyport Maritime Society’s building on State Street. His wife passed away in 1867. It’s possible that when his wife passed away, he could not manage the house and needed extra income.

A special thanks to Sharon Spieldenner, Newburyport Library Archives for helping with the research.