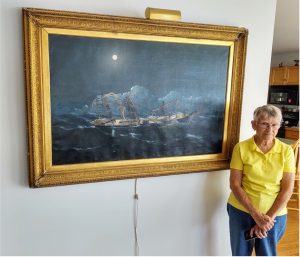 Ellen Grant, with a painting of the ship Anahuac

Ellen treated us to a wonderful lunch of lobster salad (what else?) and showed us some of the heirlooms that have come down to her through her great-grandfather’s family line. Of note was a large oil painting of the ship Anahuac (sometimes Annahuac), by renowned Liverpool marine artist William H. Yorke, which she generously donated to the museum.

This beautiful, moody painting depicts the ship in the middle of a “whirlwind” that struck on May 11, 1873, 400 miles W.N.W. of the Azores, while under command of Captain Spalding. The ship limped into the Irish Sea, and was finally towed into Liverpool on May 28. It is likely that Captain Spalding commissioned the painting from Yorke at that time, to commemorate the event.

Born in Houlton, Aroostook County, Maine, in 1842, George Spalding began his career at sea in 1858, in the Newburyport ship Clarissa Currier, Capt. William Bunting, sailing to Australia and India as a deckhand. By 1865, Spalding was living in Newburyport, and on February 10, 1868, he sailed as first mate on the newly-built 1284-ton Boston ship Anahuac to San Francisco. In April of 1870, he took command of the ship, and in November became a member of the Newburyport Marine Society. George Spalding had a long and interesting career. He was one of the last to command exclusively sailing ships, as steam vessels became the norm. He saw just about every commercial port in the world, from China and Japan, to India and Australia. 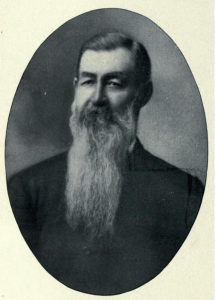 George’s son William was born in Newburyport in 1874. By the time he was 20, he was working schooners: first the Nimbus, a four-masted schooner built in Belfast, ME in 1890, and registered in Boston; then the Schooner Viator out of Boston. By 1900, William was a “seaman” in the U.S. Navy, where he would continue throughout the 1910s. In 1919, he was a merchant mariner, and had taken the freighter S.S. Lake Lilicusun from Cardiff, Wales, to New York City. He moved to Wells, ME with his family in the late 1920s, after his father George’s death; the 1930 and 1940 census records show him running a house painting business in his later years.

William’s son Prescott Spalding, father to our generous friend Ellen, was also in the Navy, serving as a stevedore during World War II. As the war progressed and new needs developed, specialized types of battalions and detachments became essential, the largest group being the Special Battalions used for stevedore duty. The nature of the Pacific war made stevedoring at the advance bases difficult and dangerous, especially since a ship being unloaded presented a good target for the enemy. Lt. Spalding’s duties included unloading all supplies from ships, and construction of airfields in Guam, Tinian, and Kwajalein Atoll. 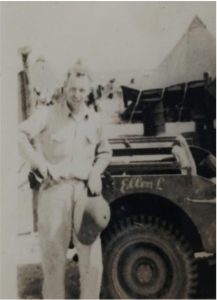 Museum researcher Carrie Poirier, who provided material for this article, made this observation about the Spalding family:

“The most remarkable thing that sticks with me is the way the family reflects the course of maritime and technological progress. George had a great career on the sea and a very rough life of loss and gain. William P. survived the transition from the age of sail (from a mate on the great schooners of the 1890s) to bringing modern steam ships across the Atlantic in World War I. Finally, Prescott cleared the airfields on Tinian from where B-29s took off and ushered in the atomic age.”

So once again, thank you, Ellen, for donating this one-of-a-kind piece of your family’s history. The Anahuac painting makes a wonderful addition to the museum’s important collection of ships’ portraits, and joins two other Yorke paintings in the collection: the Importer (also by William H. Yorke) and the Montana (painted by William G. Yorke, father to William H.).