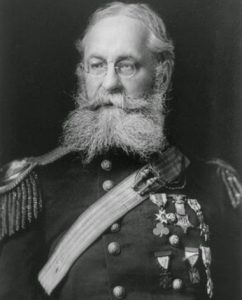 This is the first in a series of articles revealing “hidden heroes” of Newburyport. Our first hidden hero, Adolphus Greely, was on the cutting edge of technology. He was one of the first telegraphers in the military, a founder of the U.S. Weather Service, and introduced the radio and the automobile to the military, as well. An explorer and accused cannibal whose life was in peril; he was given an elaborate hero’s welcome after returning to Newburyport.

Adolphus Washington Greeley was born March 27, 1844, to John Balch Greely, a shoemaker, and Frances Cobb Greely, who worked as a weaver in the cotton mills. He grew up on Prospect Street and graduated from Brown High School in 1860. Greely became a career Army man, enlisting in the 19th Massachusetts Volunteer Infantry in 1861, when he was just 17 years old, serving throughout the Civil War.

Growing up in Newburyport, Greely would have been familiar with the abolitionist writings of his fellow Newburyporter William Lloyd Garrison, and of Haverhill abolitionist and poet John Greenleaf Whittier.  Little wonder, then, that Greely volunteered for the Union cause in 1861.

Greely served, and was wounded at, several of the major battles of the war, including Ball’s Bluff, Antietam, and Fredericksburg.  In 1863, Greely accepted a commission in the 81st Colored Troops, and commanded black soldiers in the occupation of New Orleans.

In 1867, having risen from the rank of private to Brevet General of Volunteers, Greely was then commissioned as a second lieutenant in the regular army, and was assigned to the 36th infantry, where he began to study electricity and telegraphy – new technologies he had seen put to good use by the Union Army during the war.

With his newly acquired knowledge of telegraph technology, Greely joined the Army Signal Corps in 1867.  After serving two years in the Nebraska campaign against the Cheyenne, Greely was assigned to Washington D.C., where he was asked to help Signal Corps founder Albert Myer organize the US Weather Bureau.

Now an adept meteorologist, Greely spent the next several years, from 1873 to 1881, using his scientific knowledge and technical know-how to oversee construction of thousands of miles of frontier telegraph lines in the Southwest U.S.

During his tenure as Chief Signal Officer, from 1887 until 1906, Greely modernized the Corps, introducing radio and automobile technologies into military use.  He also spent $50,000 in 1898, to convince Samuel P. Langley to produce a flying machine for the military.  Though unsuccessful, Langley’s work encouraged the Wright brothers, who sold a specially modified Wright Model A to the Corps in 1909; the first military airplane.

Greely was also the officer in charge of San Francisco’s earthquake relief efforts in 1906 and represented the U.S. Army at George V’s coronation in 1911.

In 1881, Greely volunteered to lead an Army scientific expedition to the Arctic, taking a 25-man party to establish a meteorological station.

Greely sailed on the USS Proteus, reaching his base camp at Fort Conger, on the eastern shore of Lady Franklin Bay, off Ellesmere Island, in August 1881.  Greely collected data for two years but realized he was in trouble when, by August of 1883, two relief ships had failed to reach camp.

The expedition then made their way south by boat to Cape Sabine, where they expected to find help, but was forced to winter there with dwindling provisions.  By June 1884, when the ships USS Thetis and USS Alert finally reached Cape Sabine, nineteen of the twenty-five men were dead.

Returned to Portsmouth, New Hampshire, by the Thetis and the USS Bear, Greely returned to Newburyport on August 14, when the city held a parade, reception, and fireworks; an all-day affair, welcoming him back home as a hero. Local historian John Currier noted that “arches, bearing appropriate mottoes, were placed across State Street, Prospect Street, and in front of City hall.” 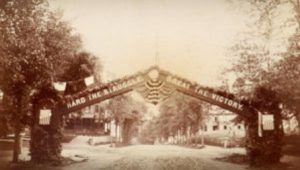 Initially, Greely was publicly criticized for his leadership, including unsubstantiated reports of cannibalism, though he was later exonerated when it was determined he had “performed correctly and courageously,” according to his orders.

Notwithstanding the awful ordeal of the Lady Franklin Bay Expedition, Greely’s expedition data on Arctic weather and tidal conditions earned him recognition by both the Royal Geographical Society of London (Founder’s Medal) and the Societé de Geographie (Roquette Medal) in 1886.

In 1888, Greely joined with thirty-two other pre-eminent U.S. scientists and explorers, to organize “a society for the increase and diffusion of geographical knowledge.” The National Geographic Society was incorporated on January 27.

In addition to authoring several books, including “Three Years of Arctic Service” (1886), “American Weather” (1888), and “Handbook of Arctic Discoveries” (1896), Greely contributed regularly to National Geographic magazine and donated his collection of Arctic books and scrapbooks to the Society.

Greely was the only volunteer private to attain the rank of Brigadier and Major General in the Regular Army. He received the Medal of Honor, a week before his 91st birthday in 1935. 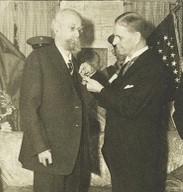