The Fresnel Lens is Heading Home: An Interview with a Lampist

The Fresnel Lens is Heading Home:  An Interview with Lampist Kurt Fosburg 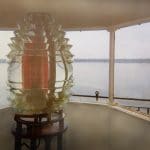 On September 1st, Kurt Fosburg of Superior Lighthouse Restoration, LLC will be moving the Fresnel Lens from its home of over four decades at the Custom House Maritime Museum to its original home in the Pomham Rocks Lighthouse in Riverside, RI. We interviewed Kurt, one of only a handful of Coast Guard certified lampists in the country, recently to learn how he became a Fresnel Lens lampist and learn more about his work and what will be involved in moving the lens from the CHMM to the Pomham Rocks Lighthouse on an island in Riverside.

Kurt is the VP of the Board of Directors of the Marquette Maritime Museum in Marquette, Michigan. Their museum received a 2nd order Fresnel Lens in 1999 (a much larger one than our 4th order) which came with lampist James Woodward who assembled it. Any lens above a 4th order comes in parts. A self-described Jack-of-all-trades, Kurt was drawn into the beauty and history of the Fresnel Lens, apprenticed under James, and ultimately worked with him as a business associate for 13 years. Kurt has worked on over 100 Fresnel lenses in locations all over the country.

The Michigan lampist has had a diverse career history. “I’ve never sat behind a desk,” he affirmed.  From his Lake Superior home, he ran a fishing charter boat, then a ferry full time. “Ironically,” he noted, “I ran people to a lighthouse and gave a lighthouse tour.” He also worked locally in Warren, RI on Blount’s cruise ships, giving tours. “I’m a mechanical engineer and a jeweler by trade and a kind of jack of all trades,” he explained. He added that the Fresnel lens is “like a really, really big jewelry, in a way.”

One of only a handful of lampists that work on Fresnel Lenses in the United States, he is the only person that makes reproduction parts for them. He built a pedestal for the 6th order lens in the top of the Pomham Rocks Lighthouse so the original pedestal could be brought down and placed with the lens it once held. In 1871, the pedestal in the tower held their first lens, a 6th order Fresnel. That was replaced with this 4th order lens in 1926. Kurt also built a reproduction brass wick-style lamp (electric instead of oil), to place inside the lens.

The history behind the lenses is a long and interesting one. Invented in 1822 by French physicist, Augustin Fresnel specifically for lighthouses, it has been called “The invention that saved a million ships”, Bernhard, Adrienne (21 June 2019), BBC, retrieved 4 August 2019. They are fragile and a lighthouse keeper was always there to clean and take care of it. In 1939, the U.S. Coast Guard took control of the lighthouse service and felt the technology was obsolete. They decommissioned them salvaged the brass for use during WWII. It wasn’t until the mid to late ‘60s that they finally started saving them. There are currently less than 50 Fresnel Lenses on display in the U.S. and only a couple of working ones.

To prepare for the move of the lens at the CHMM, Kurt is building an “Egyptian-style” crate that will have two holes on both ends that will hold two poles. This is how two people will be able to carry and protect the 150 – 175 lb. crystal lens which will be lowered into the crate with a hydraulic table. He says this move will be pretty straightforward and that going through Boston will be the most terrifying part!

What inspires Kurt Fosburg about working on Fresnel Lenses? He gets to go to unique places on the water, which, being a boat caption, he loves. One such place is Makapuu in Hawaii which boasts a huge 12’ tall, 8’ wide lens the size 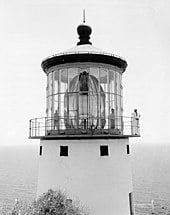 of a small room. Three people can work inside at once.

He also worked on the Fresnel Lens featured in the 2018 movie “The Lighthouse” with Willem Dafoe and Robert Pattinson. A 70-foot lighthouse was constructed in Nova Scotia for this movie, and Kurt installed the Fresnel Lens and built its pedestal.

What are the challenges? Every single lens is different. American lenses came from France and have neither metric nor English threads. Each manufacturer has their own measurements. Logistics is probably the biggest challenge. Some lenses were installed before the tower was complete, so moving the lenses require creative thinking. Some are taken apart and hauled down the tower stairs strapped to their backs. Others may be lowered down with simple block and tackles.

Once the Fresnel Lens arrives at the Pomham Rocks Lighthouse, Kurt will clean it and apply a stabilization solution around the litharge (material around the glass) and replace any litharge that’s missing. It will then be ready to mount on its original pedestal and greet visitors in time for the lighthouse’s 150th anniversary. The Custom House Maritime Museum will miss it, but we congratulate the Friends of Pomham Rocks Lighthouse on the return of their special and beautiful Fresnel Lens.